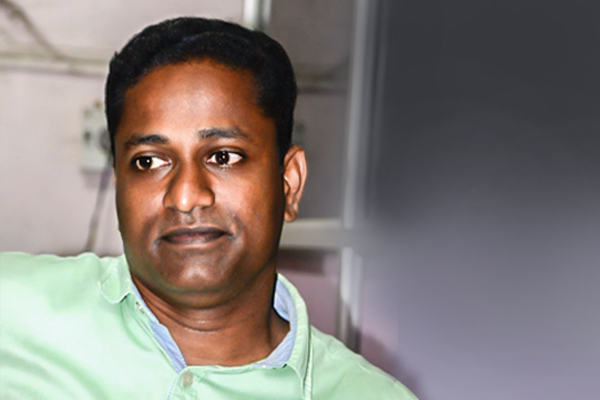 Abhilash Thiruvoth, is a self taught artist who creates wonder with colours. The paintings born on the canvas of Abhilash promotes rethinking. He has good chemistry with lines and colours, where his study topic is also chemistry. As an artist, Abhilash try his level best to become the voice of the voiceless. His work speaks both to himself and others.

He doesn’t really want to capture the image with colours; rather, with careful and gorgeous strokes, he want to give life to my thoughts and reflections. His endeavor on every finished work is to breathe life into the sidelined, forgotten and neglected social strata so that its designs, ideas, innovations and issues of life are displayed on his canvas. Before he start his work, he read as much as he can, about the specific set of details he is about to recreate on canvas.

Abhilash was born to Kunjiraman and Radha T, on 6th June 1980, at Perambra. He earned his school education from Perambra UP School and Perambra HSS. He received his higher education from Govt. College Madappally, Zamorin’s Guruvayurappan College, and Govt. College of Teacher Education, Kozhikode. At present, Abhilash Thiruvoth is working as a teacher of Chemistry at GVHSS Payyoli.

Since his college days, he used to show magic with his brushes.  Abhilash did the Illustration to book of VR Sudheesh named ‘Ambili Poovu’,published by Mulberry, which was a turning point of his life.

He is working as an artist in the Kerala SCERT for High School Textbooks since 2008. Abhilash is preparing storyboards for several documentaries and short films for the last ten years.

He made his presence at ALK Raja Artist Camp, Kalakar Kerala, Kerala Lalithakala Akademi Camp and other workshops.

Portrayed the History of Indian Chemistry, in a single canvas, at Zamoins Guruyoorappan College, where he did his graduation. In addition, the Great Kozhikode heritage and the Zamorin, Vasco Da Gama, Kallaiya River, Guruvayurappan College etc took place in his Canvas. The copy of this picture, which gained much attention have been installed at the Acharia Prafulla Chanderi Museum, University College, Calcutta.

The picture ‘The Polyphony of Indian Education’, which was published by Subhash Chandran in 2015, has also gained great appreciation. That picture is installed at Govt College of Teacher Education, Mananchira, Kozhikode.

Organized Budha Painting exhibition at the Academy of Fine Arts, Calcutta, on August 2018. Abhilash has featured over 80 paintings stirred with colors of sharpness of the word.

Abhilash wanted to transform the image language into his language of dialogue with the society.