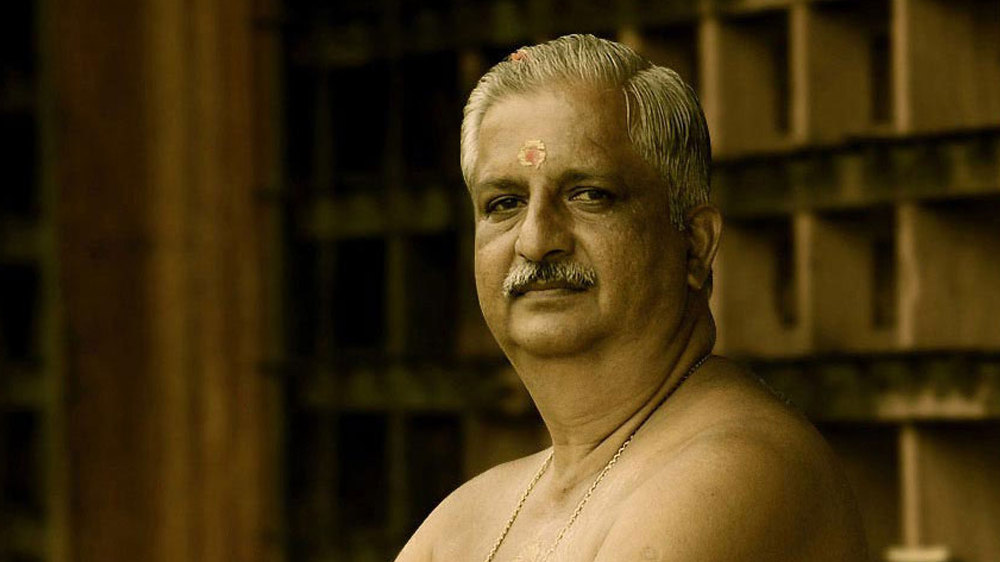 Be it at the world renowned Elanjithara Melam on the Thrissur Pooram day or a Thayambaka performance in a remote village temple, the Peruvanam Kuttan Marar’s concerts starting on a slow pace would gain momentum and speed up to an exciting finish, particularly in traditional venues where the crowd realizes pure rhythm entertainment at its zenith. Visit any of Kuttan Marar’s melam venues to see hordes of percussion lovers waving their hands in rhythms of joy as the orchestrated sequence of chenda and elathalam beats reach its crescendo. 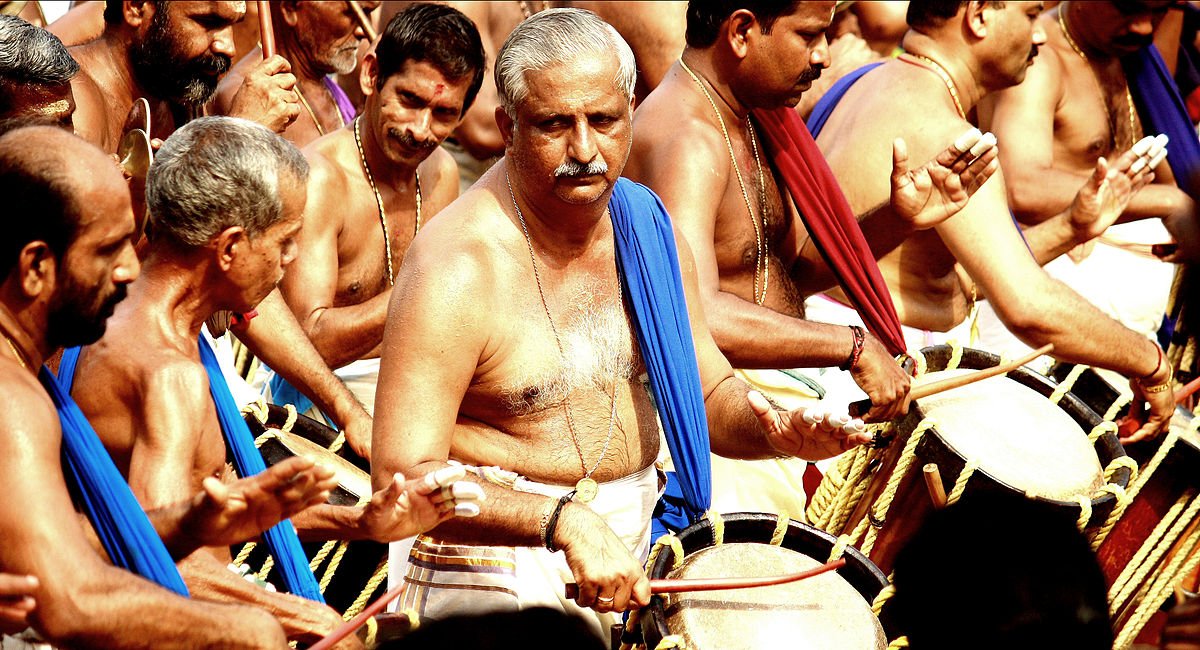 Tens of thousands of music lovers visit the Thrissur Pooram every year, just to savour the sounds of Elanjithara Melam, undoubtedly the most magnificent traditional percussion ensemble in the world. Hordes of percussion lovers gather under an Elanji tree at the Sree Vadakkumnatha Temple, Trissur, to experience live, the orchestrated sequences of chenda and elathalam beats.

For the last 33 years, Peruvanam Kuttan Marar is associated with the Elanjithara Melam of which for 12 years, he had been the Pramani (chief) leading the group of 250 artists of various instruments like drums (chenda) , pipe, cymbals and horns. In amazing technical exactness, sheer discipline of the instrumentalists and to absorb in the pure and mighty symphony of rhythms, Elanjithara Melam has no parallel.

The true ‘Pramani’. The inimitable Maestro.

In a magnificent tradition like Kerala’s rhythm music / percussion ensemble involving over 150 artists, it becomes difficult to distinguish the level of individual artistry of any particular participant. This is particularly so as there are no rehearsals prior to the performance, and many participating artists may be meeting after long intervals just before the Melam performance. But as the leader of the band, a daunting task lies ahead for the Maestro. It is to bring out the best of every artist, yet retain the purity and discipline of traditional Melams. No other rhythm artist of the Kerala tradition in known history has been entrusted with the leadership of so many Melams spread all over the state as Peruvanam Kuttan Marar.

The leader of a traditional percussion ensemble in Kerala is called the ‘Pramani’. A true Pramani must possess apart from individual virtuosity, tremendous leadership qualities, the ability to take the combined strength of the entire group forward without the slightest deviation from established norms, perfect control over the measure and speed of time, and the ability to interact with co artists with both respect and affection irrespective of their age.

Sincere obeisance towards Gurus, deep awareness of the beauty of Tala, respect for tradition, the capacity to take apt and instant decisions in the midst of a performance, and so on adds to the making of a total and perfect Pramani. Peruvanam Kuttan Marar is a rare artist, blessed with all these attributes in abundant measure.

The true patron and protector of tradition.

‘Peruvanam’ as he is popularly known, along with a highly talented group of percussionists, has been playing the key role in keeping

a rich legacy in percussion performances unique to Kerala, alive in its full glory. The Maestro acknowledges the sincere cooperation of his team members, for his success and glory as an artist and an artistic leader, all these years.

Peruvanam Kuttan Marar is the real patron and protector of the traditional and hereditary methods and customs of the various genres of Chenda Melams. The Maestro has also conducted several lecture demonstrations on Chenda Melam and has written several articles on the subject.

Peruvanam’s fame has only grown, and along with his name, the percussion art of Kerala is also growing in reputation. His sincere contribution and cooperation to preserve and protect this rhythm culture has much historical significance. Inspired by his magical performances and his celebrated persona, more and more youngsters are now attracted towards learning the great traditional art form of Chenda Melam.

The noble, selfless, King of Percussion.

In order to find new avenues and opportunities for propagating the Melam tradition, he has even agreed to perform without any monetary considerations. He also strives to rediscover some aspects of the Melam tradition which are fast vanishing from performances and to propagate them. He has thus dedicated his life to the total development of this intricate art form.

He is ever willing to accept any challenging assignment, no matter what the quantum of work involved. His performance at Puthur, Palakkad, 4 years ago, can be cited as a perfect example. A series of Melams led by Kuttan Marar beginning at 4 pm and continuing without break one after another ending at 10 am the next morning after 18 hours! Even today during temple festivals, he leads on many occasions at least 3 ensembles lasting 9 hours continuously.

Little wonder then, Peruvanam Kuttan Marar gained the massive reputation as the most wanted Percussion Maestro with abundant skills to lead concerts for hours together.

For this reason, every season, the Maestro has to travel across the length and breadth of Kerala. He has also travelled and performed extensively across the country and as special invitee in various international stages.

The Maestro’s cultural activities, in a glimpse.

Peruvanam Kuttan Marar is the motivating force behind a number of artistic initiatives in and around Peruvanam village. As Vice President of an organisation called Samskriti Kshetram, he has been responsible for organizing many classical art festivals. A festival titled ‘Pramanikam’, which included a number of vanishing aspects of Rhythm music, organized by him is considered to be a milestone in the history of Rhythm music tradition. He is also the Patron of Marar Kshema Sabha and the Director of the Peruvanam Appu Marar Smaraka Vadya Kala Peedham which enable him to utilize his spare time for creative artistic endeavours.